检索到 金刚手-降魔金刚手 本尊5位
In Vajrayana Buddhism there are the three famous bodhisattvas which represent the essential characteristics of all the buddhas of the ten directions and three times. Manjushri represents wisdom, Avalokiteshvara compassion and Vajrapani power. Vajrapani as caretaker and guardian of all the Tantras is the special deity for removing the various types of obstacles that can arise during intensive practice. Within the Sakya School in general and the Lamdre Tradition in particular Vajrapani in the form of Bhutadamara is the foremost practice for removing obstructions on the path of a practitioner. The practice is found in Kriya, Charya and Anuttarayoga Tantra. Within Anuttarayoga it arises from the exclusive explanatory tantra to the Hevajra called the Vajrapanjara Tantra (chapter two). The meditation and explanatory teachings are based on the ritual text (sadhana) of the Indian Pandit Trailokyavajra and the teachings coming down through Sachen Kunga Nyingpo, the sons Sonam Tsemo and Dragpa Gyaltsen, and Ngorchen. The standard meditation text is written by Ngorchen Konchog Lhundrub, (1497-1557). The Tibetan commentary most commonly used was written by the great Zhuchen Tsultrim Rinchen and called the Shining Sun. A shorter commentary was written by the Tsarpa teacher Zimwog Lhagsam Zangpo.
There are two main differences between the Charya Tantra form of Bhutadamara and the Anuttarayoga form of the deity. First, the Charya iconography has the deity standing atop an elephant headed Vighnantaka. In the Anuttarayoga iiconography he stands atop Aparajita with a wrathful rakshasa face. The principal Charya form of the Bhutadamara, also found popularized in the Vajravali of Abhayakara Gupta, describes a thirty-three deity mandala. The Anuttarayoga form is a solitary deity without a detailed mandala or any retinue figures.
更多来自喜马拉雅网站的学术资料 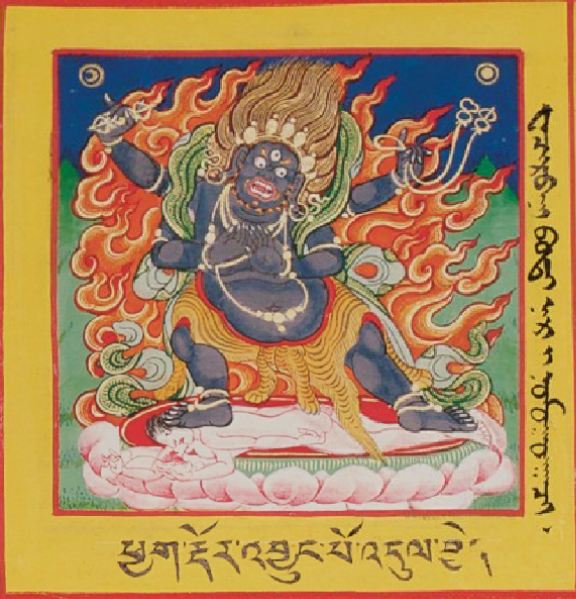 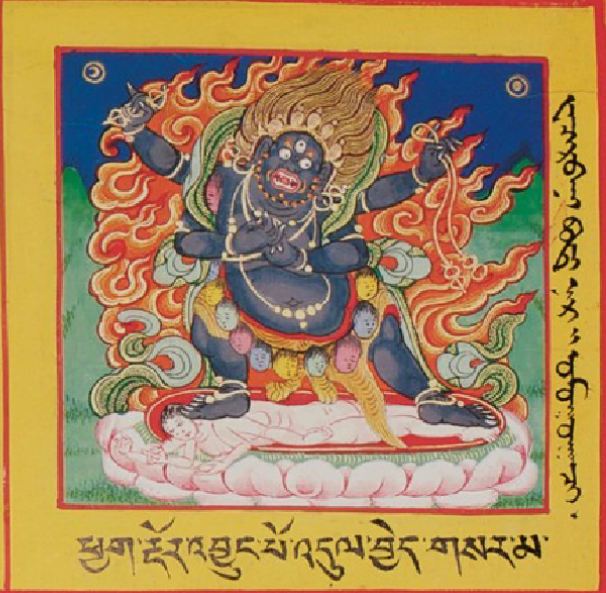 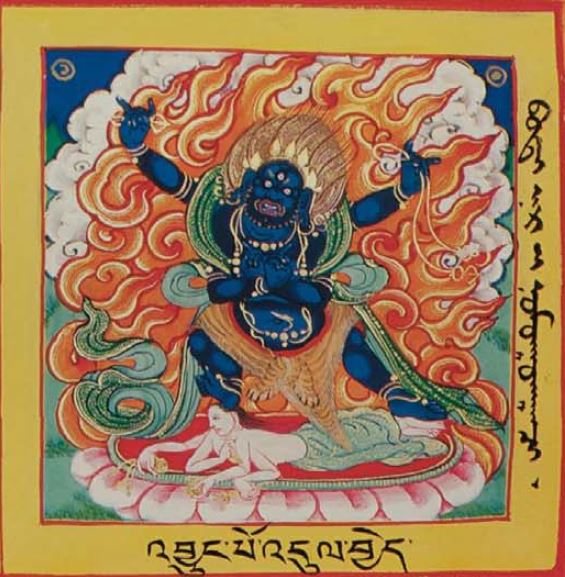 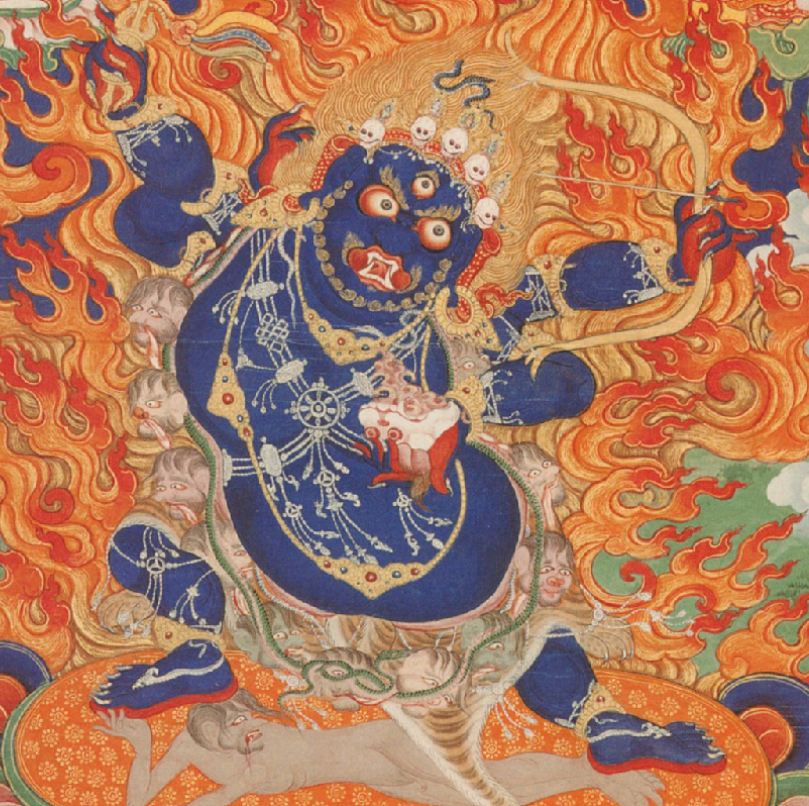 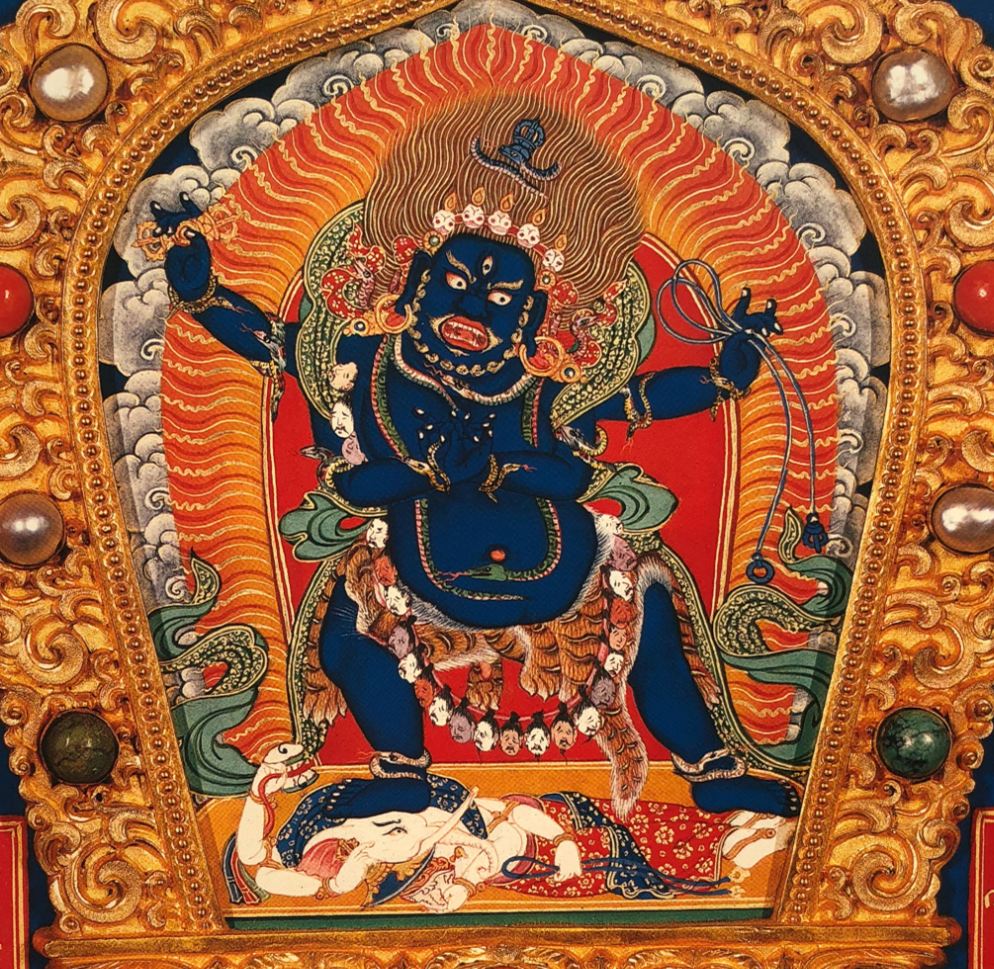